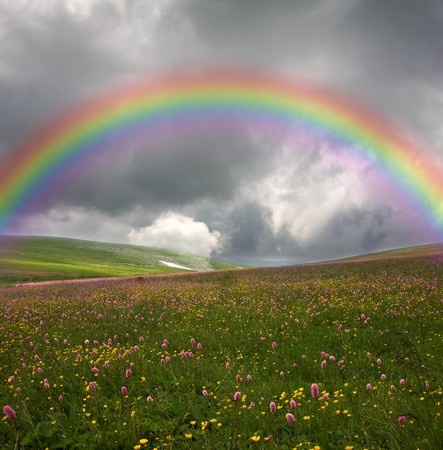 We are  all aware of the magic of rainbows but I wonder how many of us have been at the end of one or been close enough to one? There seem to be far more over the years than there used to be. I recently had an experience which I would like to share and perhaps some of you have experienced something similar, in which case I would love to hear.

I was driving up the A1 motorway one day last week around nine am. It was a bright sunny morning and as I drove along the sky was clear. Then I noticed the rainbow which looked as though it was straddled across the dual-carriageway. At first I thought I was dreaming. How often in our lives do we see rainbows so close, and the colours red, orange, yellow and green to the right of the dual carriageway and blue, purple and violet so bright to the left of the dual carriageway? The road ahead as I drove onward was dark grey colour. It was one of those times when you want to stop and take a picture and you realise you have left your camera in the boot.. Well on this occasion my hands were full and too much traffic to pull over. So I continued through this darkness, as raindrops bounced off the bonnet of my car like hail stones but the size of five pence pieces. I was almost at my destination when the sky became brighter as though I had come out of the other side..

I later learned that in Colorado Springs double rainbows  are regularly seen in the skies.