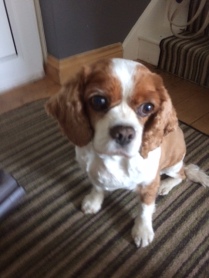 I have always been interested in all kinds of training for dogs, mainly to see what sort of training is out there.  I have had dogs most of my life and looking around it is interesting just how many types of training there is out there. I have never seen so many different forms of training as we see now.  My ex-husband used to train collies to work on the farm to herd sheep and cattle. I noticed, that whilst watching him, out with young pups and older dogs he always had complete control over them and they listened to every word he said. In fact, as his young dogs grew stronger and began working with older dogs he used a whistle which went under his tongue and was high frequency. He never gave his dogs treats, and when he was out on the hill, his dogs worked with him, regardless of weather, hail sleet or snow, those dogs would have followed him to the end of the world. This made me think and question why people nowadays give treats to their dogs to keep them near, stop them jumping up, and so many other reasons.

Today I received a message in my inbox, which read; Doggy Dan, The Easy Way To An Obedient Dog! This got me thinking and made me question why people nowadays give treats to their dogs to keep them near, stop them jumping up, and so many other reasons.  I opened the email out of curiosity, to begin with, and having read through it all it rang a bell in my head. Doggy Dan and his form of training seemed pretty well worth looking into as it was the training which we used up on the farm. I signed up for it once again I was informed I would receive a four-day course with videos. This course is about your dog learning to follow and listen to you. Once he realizes that you are the pack leader he will be happy to follow and obey you.  This sounded very interesting and so I read on. Doggy Dan trains dogs and has been for a number of years. In his courses of four videos, he explains how using treats is not a good way to train your dog. If your dog chooses to follow you then he will listen to what you have to say. This course of training is very reasonable and you should have your pet responding to the way you speak to him.

Check out his link  Doggie Dan http://theonlinedogtrainer.com You might be glad you did.

I would like to add that I am not an affiliate for this training and will make no money out of putting it on my post. I only thought that Doggy Dan sounded very genuine.

Today I want to share an experience I’ve had using energy healing with animals to highlight the benefits and potential healing qualities using an alternative therapy.

I received a phone call from Ray Byrd who had Huskies. They were a team and competed in dog sledding events. He had five Huskies and Tai was his leading dog. One day, he noticed that each time he took the team out training Tai was not interested in running with the team. He was also aware that Tai’s temperament had also changed. In a short time, his dog began losing weight. Ray changed Tai’s food but noticed him not being interested in eating. Ray was very concerned about Tai, as he had always loved being in the team. The vet did tests but nothing showed up. Tai became lethargic and tense when awake. Ray tried everything and nothing worked.  He feared his top trial husky may have to be put to sleep. Ray heard about me through his friend and he phoned me.

On my first visit, I was not sure how his dog would receive me as Ray said Tai’s temperament had changed and due to him being nervous of strangers he wasn’t sure how his dog would behave. I went into the house and sat down on the sofa. Ray explained about his dog and mentioned that Tai may not come near me at all. I chatted with Ray’s wife and within ten minutes of being there Tai jumped onto my knee, and within a short time he was fast asleep. Both Ray and his wife couldn’t believe their eyes. I worked with his energy while he was asleep. After approximately 35 minutes Tai woke up and went into the kitchen. Ray, gave me a cup of coffee and when I finished drinking it, I asked them to keep me in touch and he agreed.

I visited him a second time and they had noticed a good improvement. I gave him his second healing and once again to let me know how he was. It was about a month later when Ray called me back. He phoned to say that Tai was back to eating and was beginning to put his weight back on. His attitude was back, too and he was enjoying going out with the pack.

Each living thing is made up of energy and using healing therapy can help assist with blocked or stagnant energy. Using energy healing with any animal can assist with moving and clearing the energy that may be affecting the animal’s mood or behaviors.

Don’t be afraid to try new therapies to help your pet’s well-being.